Home » Blog » Portable Power Solutions for Campers on the move

Although dual-battery systems have been around for many decades – commonly in the form of a manually operated switch – it was only until 1998 that the split-charging system was automated via an Intelligent Solenoid.

A short while later, the market called for a portable version, one that could be recharged via a vehicle’s alternator, but also have the added functionality of being mobile around camp.

And so, in 2004 we launched the National Luna Portable Power Pack (Aka: The “Grey Box”). The product was a huge success, but more importantly, it paved the way for further customer input, product development, and what is now the world’s widest range of vehicle-based portable-power solutions. 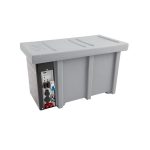 As mentioned above, the ‘Grey Box’ is National Luna’s longest standing portable-power pack, and has been our top seller for nearly 17 years!

The product started its evolution as a glass-fibre housing, but quickly evolved into a super durable, injection-moulded plastic unit. Likewise, the product’s versatility and power points have been continuously upgraded to include multiple USB ports, an Intelligent Charger port, as well as a variety of 12V sockets.

Users seeking the best possible value for money in the form of a low cost solenoid based dual-battery system, packaged in a plug & play portable housing. 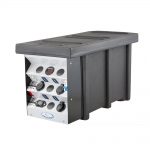 While the ‘Grey Box’ enjoyed many years of market dominance, a large number of National Luna customers wanted a straightforward battery box with no split-charging system. In response, we created a simplified version of the ‘Grey Box’ by ditching the Intelligent Solenoid and replacing it with customisable control panel.

In 2014 the ‘Black Box’ was born, boasting a patented faceplate that significantly increased the number of available power points. Better still, each port could be swopped out for an alternative power socket, allowing the user to customise the box to their requirements. 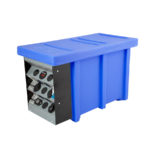 As you know, the lifespan of a lead-acid battery is directly related to how deeply it’s discharged, and because of this, some campers want a larger battery within the 140A/h range. In most cases, these batteries are taller than their smaller-capacity alternatives.

As a result, in 2018 we increased the Black Box’s height by 20mm and launched the optional ‘Blue Box’ product for customers who wanted a larger capacity battery system in their vehicle and/or trailer. 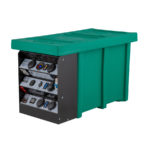 As more and more campers turn to DC-DC charges in response to advanced battery- and alternator technology, the need for a portable DC-DC system was clear. That said, in 2017 we began looking for ways to integrate our 25A DC-DC charger into the confined spaces of a battery box.

The Green Box hit the market in 2019 as our flagship portable power solution, as well as an industry first in terms of being a plug & play, portable, DC-DC dual-battery system.

Well, we’d like you to tell us! In keeping with the tradition of hearing what our customer’s have to say, we’d like to hear your thoughts on what portable power solution we should focus on next.

So click here to share your input, or signup below to our newsletter and be the first to hear of any new product launches before they officially happen.

Gift Ideas for the Adventure Family

Take A Load Off

Why your vehicle’s battery is dying, and how to prevent it?